The Dreaming Spires of Oxford 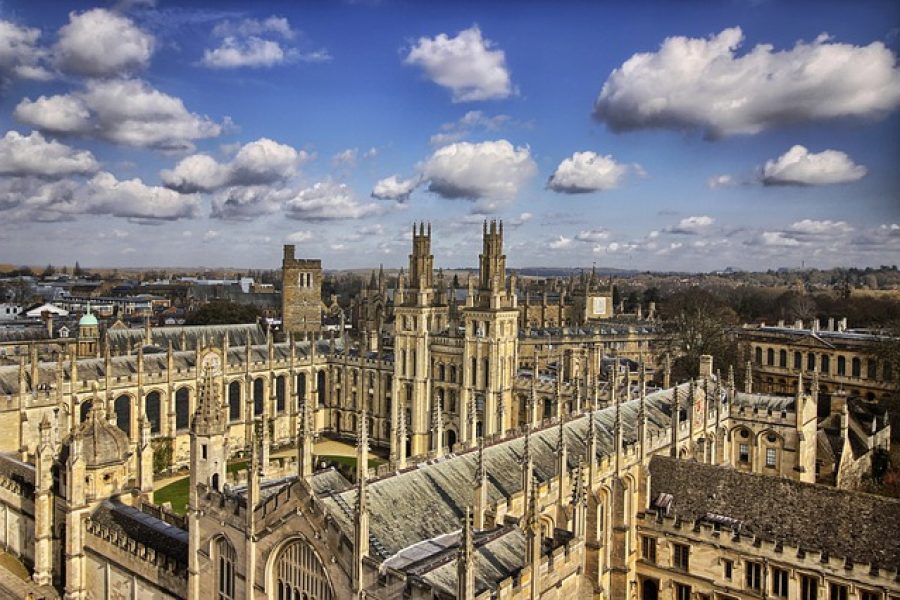 The Dreaming Spires of Oxford

This post originally appeared as a column in 2018 after a trip to England. If you’ve read Book One in the Dickens & Christie cozy mystery series, you may recognize some of the sights Leta and Wendy enjoyed.

As we continued our vacation in England, it was hard to imagine anything topping Dartmouth, Tintagel, and the Cotswolds, but Oxford may rank as my favorite spot in England. It’s not only compact and easy to navigate but also filled with charm and history at every turn.

Day one, we visited Blackwell’s BookShop, the oldest bookshop in Oxford.  Naturally, we had lunch next door at the White Horse Pub, the scene of many an  Inspector Morse and Lewis adventure.

The day was warm and sunny, perfect for a pre-dinner riverboat cruise on the River Thames or River Isis, as it’s called in Oxford. We walked to Folly Bridge where we boarded our boat, sipped prosecco, and listened to history and literary trivia shared by our captain. The Grandpont House on the river, for example, was the home of an Oxford tailor who owned a hat shop on High Street in the 1800s and may have been the inspiration for Lewis Carroll’s Mad Hatter.

We glimpsed Iffley Village, founded in 1086, and sailed through one of the 45 locks on the River Thames, complete with the lock house cat peering at us. Returning upstream, we saw the Oxford rowing clubs on the bank and several teams practicing, a sight that reminded us of the many British films and television shows that feature rowing competitions.

We noticed the club named Endeavor and were intrigued to hear that Colin Dexter had taken that as Inspector Morse’s first name after glimpsing it written on the side of the building.

Day two dawned with a downpour, and I was happy I’d scheduled a Bodleian Library tour for the morning.  The information about books, history, and architecture was spellbinding. With 12 million titles, the Bodleian is the largest university library in the world, larger than those of Harvard, Yale, or Cambridge. Intended for academic research, it is purely a reading—not a lending–library.

I learned that a quarter-million of its titles were produced before 1400 and that countries have been sending their libraries here for safekeeping since as long ago as Central Europe’s Thirty Years’ War in the 1600s.

The introduction in the Divinity School allowed time to admire the door designed by architect Christopher Wren and the awe-inspiring 15th century carved ceiling.  The building served as the Hogwarts infirmary and dancing school in the Harry Potter films. We sat in the University Court, where Oscar Wilde was tried in 1888 for failing to pay his tailor bill. It was almost too much to absorb.

For lunch, a savory chicken pie in the Covered Market revived us before we briefly wandered the shops and discovered the Hat Box where I had to buy a red beret.

The entertaining Inspector Morse, Lewis and Endeavor walking tour, chosen because we regularly watch these PBS shows, was a treat despite the rain. Who knew that Inspector Morse’s Jaguar had no wheels and never really moved? Visits to shops, colleges, and pubs where TV scenes were filmed were combined with trips to chapels and other historic landmarks such as St. John’s and Exeter Colleges and the student union whose invited speakers have been famous, erudite, or both—think Monica Lewinsky, Johnny Depp, and Nelson Mandela.

The highlight of our two days had to be the twilight visit to the Varsity Club’s rooftop bar. There are simply no words to describe the breathtaking view of the “city of dreaming spires,” so dubbed by Victorian writer Matthew Arnold. If I’m ever fortunate enough to return to England, another trip to Oxford will be a must.